Jamaican art has never been as experimental as that to be found in – say – Cuba, its neighboring island in the Greater Antilles. Cuban art reached out to the Modernist Movement almost as soon as it began. And Cuba has always had links to what was going on in the mainland nations of Latin America. Art in Jamaica, linked to the UK, remained consistently more conservative.

Nor is Jamaican art, nowadays, much like the art of Haiti, though resemblances have existed in the past between what were called the Jamaican Intuitive – untaught artist linked to Rastafarianism – and the inward-turned, fiercely indigenous art of Haitian practitioners of Vodou.

The selection of works due to be shown at St Stephen Walbrook, in an exhibition curated by Theresa Roberts, a passionate advocate of the culture of her native island, in an exhibition opening on July 3rd, shows some of the nuances of Jamaican culture, as this is expressed in art.

What will be on view in the show oscillates between stuff that looks somewhat naïve (though it is soon evident that any naiveté is a mask), in this case, for example, Carl Abrahams’ witty Schoolgirls With A Prophet, and quite a high degree of sophistication? An Art Deco sculpture of Orpheus, for example, is the work of Edna Manley, generally considered to be the true founder of a recognisably Jamaican school of artists. She was also an important political figure, married to Norman Manley, one of the chief pioneers of Jamaican independence, leader of the Jamaican People’s National Party, Chief Minister from 1955 to 1959, and first Premier of Jamaica from 1959 to 1962.

While Orpheus with his lyre is a classical figure, not a Christian one but one with a relevant message about divine rapture, the show also features, in more obviously specific guises, the spirituality that pervades a great deal of the art produced in Jamaica, as well as its frequent resistance to being categorised as ‘ethnic’ – i.e. as in some way necessarily Africanising. The images are about seeing Jamaica as it actually is – not as some lost fragment of African culture, transferred intact to a different hemisphere.

Where the idea of Africa is stressed, it is to make a theological statement. Christopher Lawrence’s icon-like portrayal of an African Christ declares that Christ exists as a Saviour for all mankind. 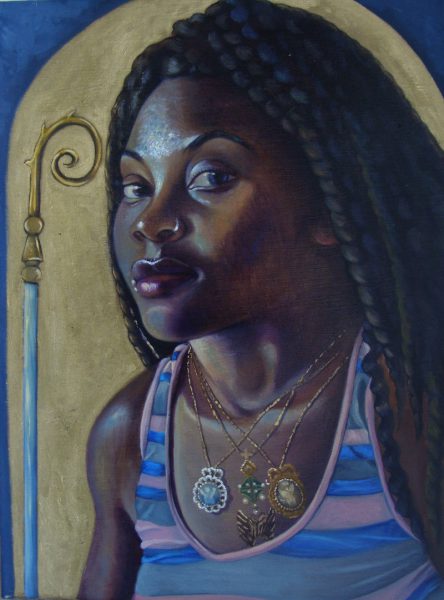 Marlon James’ Trio offers sociological, not theological instruction. It shows three Jamaican women, wearing identical pink uniforms that suggest that they may perhaps be nurses, or even actual church emissaries, as they stroll past the gates that enclose a handsome Victorian church, which stands in a garden with clipped hedges, a bougainvillea vine in full bloom and a number of palm trees. If you choose to read it that way, the image suggests both the surviving Anglo-Colonial element in Jamaican society and also the fact the Christian faith is a non-exotic, everyday presence there. Both images tell one much about Jamaica as it is now, without pushing the point.

St Stephen Walbrook will be hosting an exhibition of Jamaican spiritual art arranged by Art Jamaica (www.art-jamaica.org) from 3 July to 16 July 2017. The exhibition has been curated by Art Jamaica founder Theresa Roberts who has included mainly new work from young Jamaican artists but will also be featuring selected work from her own extensive collection. The Private View will be held on the evening of 3 July but thereafter the exhibition is open to the public. The show is made up of painting, sculpture, and photography highlighting the strong spiritual nature of Jamaica and it’s people.Whilst predominantly Christian, Jamaica is home to a wide variety of religions which coexist peacefully.The variety of spiritual beliefs held on the island reflects the diverse nature of the people who live there and the motto of the country “Out of many we are one”.

Whilst spirituality is the overriding theme the exhibition inevitably also offers a compelling insight into the diverse nature and vibrancy of modern Jamaica.