Since word of his passing surfaced, many Jamaicans have been reacting to the news, lauding him as one of the main persons who lifted Jamaican art to global standards.

In a statement released to the media, Minister of Youth and Culture Lisa Hanna expressed sadness at Watson’s passing as she remembered the artist for his contributions to the development of Jamaica’s cultural landscape. Hanna also recognised George Carter, a Jamaican theatre personality who died in a snowstorm in North Carolina last Saturday.

«I am indeed saddened by the passing of these two cultural icons,» the statement read. «Both Barrington and George not only dedicated their lives to expressing their own unique creativity while building a legacy of their own, but also dedicated their lives to enhancing and promoting Jamaica’s rich and diverse cultural heritage.» She went on to express that the Ministry of Youth and Culture is committed to ensuring that the works of both men are known by generations to come.

Cinematographer Lennie Little-White also expressed sadness at the passing of Watson. In February last year, White released a documentary called, They Call Me Barrington, which highlights the life and work of the now deceased. White told The Gleaner that he has always admired Watson and lauds him as the man who made people respect art in Jamaica.

«I put him in a category with people like Louise Bennett, Rex Nettleford and George Headley – outstanding Jamaicans who have contributed significantly to the country’s development,» he said. «Watson is the father of the art movement in Jamaica, the one who made people realise that artists were more than just painters, the one who made people respect art. He inspired a lot of the artists in today’s generation through his work, and he will be greatly missed.»

Watson’s widow, Doreen, told The Gleaner that the things she will miss about her husband are his sense of humour and his passion for passing on his knowledge to the youth.

«I know his students will miss him, as they always looked forward to classes with him,» she said. «They admired him and the wealth of knowledge he had. I will miss his company and the times we shared with friends and family.»

Watson died at his home in Kingston on Tuesday night after being ill for some time. He was 85 years old. Watson, from the 1950s to present, created 259 pieces through paintings and works on paper. His most well-known works include masterpieces such as: Mother and Child (1958-59), Washer Women (1966, on cover), Athlete’s Nightmare (1966), and Conversation (1981) and other major works from private and corporate collections.

Barrington Watson was awarded a Gold Musgrave Medal by the Institute of Jamaica in 2000.

The National Gallery of Jamaica is deeply saddened by the news that Jamaica master artist Professor the Honourable Barrington Watson, O.J., has passed away yesterday, January 26, at age eighty-five. 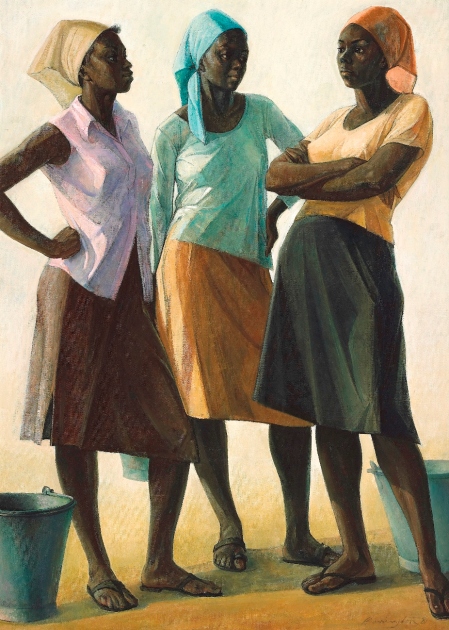 Barrington Watson – or Barrington, as he is popularly known – was born in Hanover, Jamaica, in 1931. He was educated at the prestigious Royal College of Art in London and attended several other major European art academies, including the Académie de la Grande Chaumière in Paris and the Rijksacademie in Amsterdam. He returned to Jamaica in 1961 and quickly rose to prominence as a major artist in post-Independence Jamaica. Along with Eugene Hyde and Karl Parboosingh, he established the Contemporary Jamaican Artists’ Association in 1964 and he was from 1962 to 1966 the first Director of Studies at the Jamaica School of Art (now part of the Edna Manley College of the Visual and Performing Arts), where he introduced the full-time diploma programme. He subsequently also acted as a visiting Professor at Spelman College in Atlanta. Barrington chaired the Bank of Jamaica art collection in the mid-1970s and operated several art galleries: Gallery Barrington, which has existed in several incarnations since 1974, and the Contemporary Art Centre, which was active from 1985 to 1998. His home in the parish of St Thomas, Orange Park, is recognized as a heritage site. It is part of a former coffee plantation and it has since he bought the property in 1968, served as the location of his main studio and a meeting place for artists and art lovers. Barrington left Orange Park to the Nation in 1994. 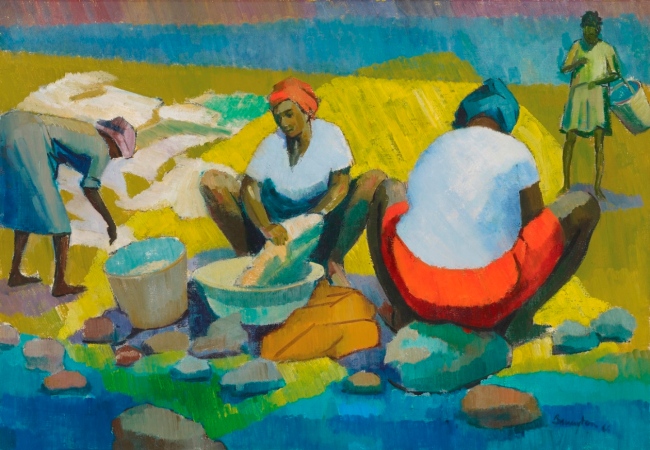 Essentially an academic realist, Barrington explored a wide range of themes and genres in his work, including history painting, genre, portraits and self-portraits, nudes, erotica, the landscape and the still life, ranging from the intimate to the epic and all interpreted with his unique painterly sensibility. Barrington insisted on being recognized as an artist first and as a Jamaican artist second but most of his paintings were inspired by Jamaica and its people and he produced some of the most iconic images in Jamaican art history, such as Mother and Child (1958-59) and Conversation (1981) in the National Gallery of Jamaica Collection. Although he is best known as a painter, Barrington was also an accomplished draughtsman and printmaker. 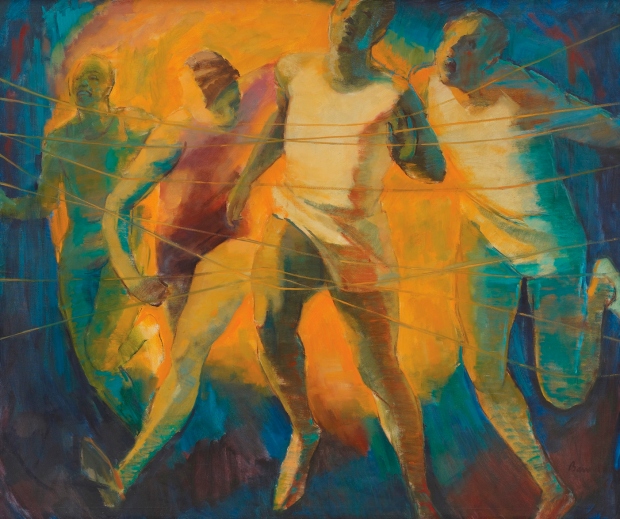 Barrington executed several major commissions, including the mural The Garden Party (1975) and the installation Trust (1975, with Cecil Baugh) at the Bank of Jamaica, and the mural Our Heritage (1974) at Olympia in Kingston. He executed many official portraits, including those of past Prime Ministers of Jamaica, of Martin Luther King (1970) at Spelman College, and of former Commonwealth Secretary-General and UWI Chancellor Sir Shridath Ramphal at the University of the West Indies – Mona (1992) and Marlborough House in London (1995). His work is well represented in the National Gallery of Jamaica Collection, with masterworks such as Mother and Child (1958-59), Washerwomen (1966),Athlete’s Nightmare II (1966), Conversation (1981) and Fishing Village (1996), and he is featured in many other public, corporate and private collections in Jamaica and internationally. 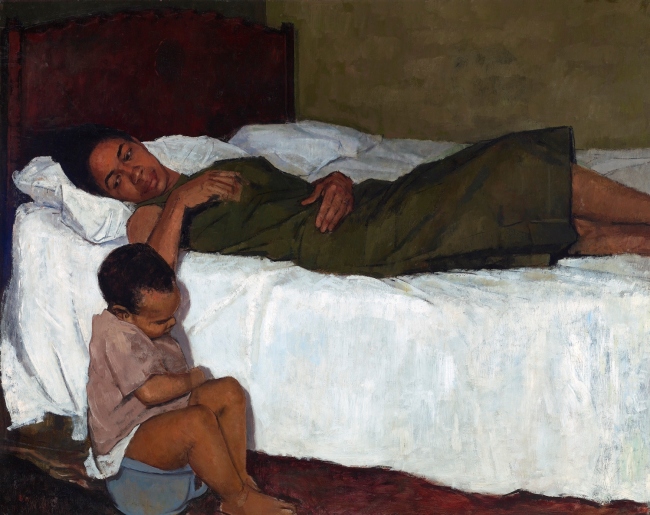 Barrington Watson received many awards and accolades during his lifetime. These include the national orders, the Order of Distinction, Commander Class, in 1984, the Order of Jamaica in 2006, and the Institute of Jamaica’s Gold Musgrave Medal in 2000. The National Gallery of Jamaica honoured Barrington with a major retrospective in 2012, which was curated by the then Chief Curator Dr David Boxer and guest curator Claudia Hucke and presented as part of the National Gallery’s Jamaica 50programme. 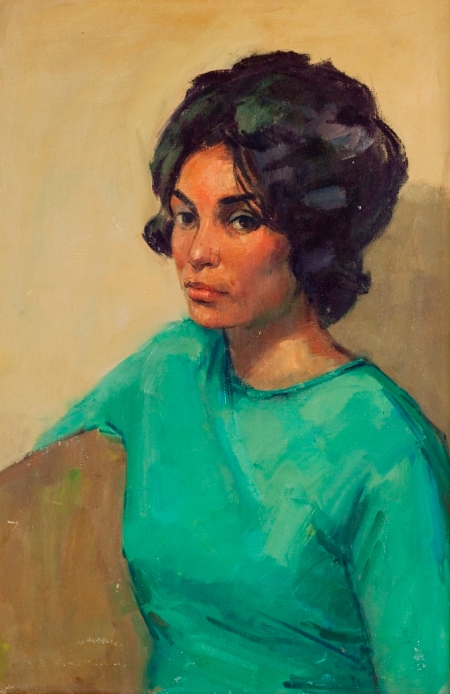 The National Gallery’s Chairman, Mr Peter Reid, lauded Barrington for his outstanding contribution to the development of Jamaican art, as an eminent artist and art educator and as a role model to many artists in Jamaica, the Caribbean and the African diaspora. He stated “Barrington is a true national icon and we will treasure his artistic legacy for many generations to come.” The National Gallery’s Executive Director Dr Veerle Poupeye added: “Barrington Watson was a defining figure in post-Independence Jamaican art and his work reflects the spirit and imagination of Independent Jamaica. He was instrumental in the professionalization of the Jamaican art world and an outspoken and influential voice in the development of modern art in Jamaica.” Barrington Watson served on the National Gallery Board for several years.

The Board, Management and Staff of the National Gallery of Jamaica pay tribute to Barrington Watson, as one of Jamaica’s greats, and extend their heartfelt condolences to his wife Doreen, his children Janice, Raymond, Basil, Bright and Shauna-Kay and his other family members and friends. 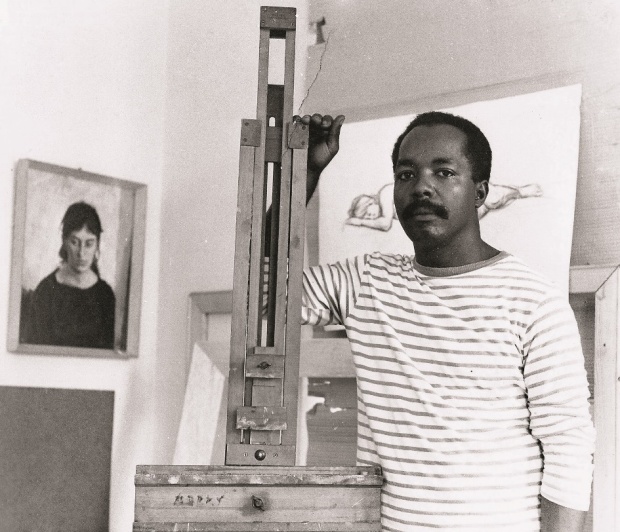